Follows on from my earlier article: Tracing the Git history of a Ruby method (11 Mar 2014)

As Chris mentioned in the notes from last week, I’ve come up with an idea for a useful way to represent the history of Ruby method definitions.

I’ve hacked together a script to walk through all the commits in a repository extracting all the method definitions using the Ruby parser code I already had. The script builds a new “shadow” repository with a commit for each commit in the original repository, but constructing a “file” for each method definition.

Thus the script turns the method definition for Foo::Bar#baz into the “file” Foo/Bar/#baz.rb and the one for Foo.bar into Foo/.bar.rb. I know this sounds crazy, but by doing this it means that a number of Git tools just work and give interesting results.

I’ve run the script against the Mocha repository so you can see what I mean. If you click the “Show Diff Stats” button on this commit page then you can see which methods have been added, modified & changed. You can even see methods that have been moved and/or renamed!

You can also see the history of an individual method on GitHub or the patch version using git log --patch on your local machine. This is actually the same functionality as method_log itself already provides, but it solves the speed problem that I mentioned in my earlier article. 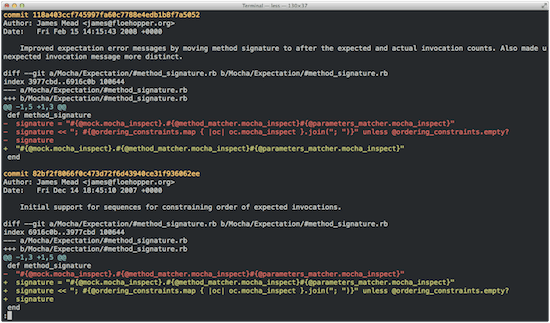 Anyway, hopefully that’s some food for thought. I’d love to hear what you think.