We had a full house for Show & Tell 26, including a couple of new faces. Riccardo was joined by his colleagues from 100 Starlings: Alex and Laslow (apologies if I’ve mis-spelled this!). It was good to see Alex having last seen him about 6 years ago when we worked at Headshift. We were also joined by Ben G, James A, Murray, Pablo, Rob C, Tadas and Tom S. 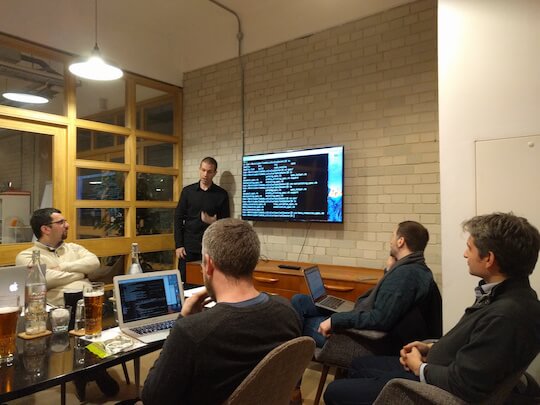 Tom demoed the latest iteration of his tool to help people interact with and understand Lambda Calculus (see Show & Tell 24 for notes about the previous version). Based on feedback about the Ruby version (both from the London Computation Club and elsewhere) Tom has ported it to JavaScript and made an impressive looking web GUI.

The similarities between RSpec and Jasmine meant that he was able to programmatically convert his Ruby tests to JavaScript. Having these tests in place made it relatvely trivial to implement all the functionality in JavaScript.

With the library in place, he was able to use React GUI to build the interface over the top. He then used create-react-app to convert his “lashed-together React prototype to a modern toolchain (Babel precompilation with Webpack, a linter, a minifier, a command-line test runner etc)”

I’m really impressed by Tom’s perseverence with this particular problem and was happy to hear that the latest version seems to be doing its job. Tom now gets questions about Lambda Calculus rather than the tool he’s using to try to teach it. 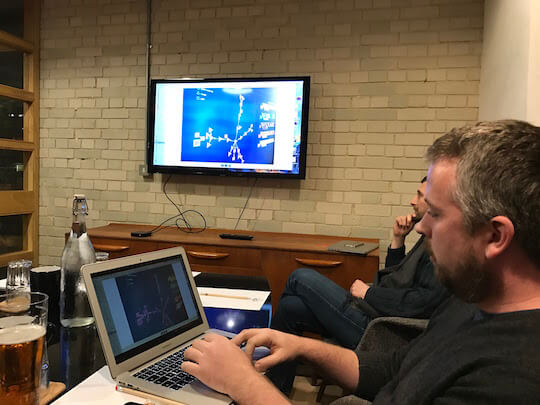 James A described his involvement in Contagion: a Science Museum Lates event in October.

He built software to help The London School of Hygiene & Tropical Medicine (LSHTM) model and illustrate the spread of infectious diseases. Visitors on the night were “infected” when someone else stickered them with a QR code. Once infected they would report to the “Health Centre”, have their QR code scanned and then receive their own stickers to infect other people.

James used a free QR code reader app to send information encoded within the QR code to the software he’d written. The software helped track the spread of the infection, who gave it to who, when and on which floor of the museum. All of which was then used to visualise the spread of infection, as seen in this tweet from LSHTM:

Here is the whole outbreak at last weeks #SMLates - Thanks for inviting us @sciencemuseum, we had a lot of fun. pic.twitter.com/7zWjQd5YGW 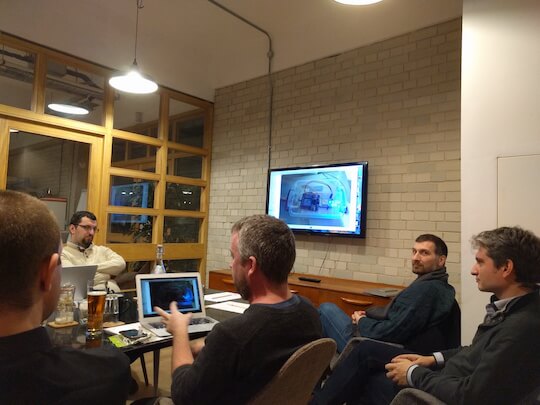 Frustrated with having to leave his chair to adjust the heating, James has been exploring how to make his life easier by connecting his thermostat to a Spark Core. The combination of the Wi-Fi enabled Spark Core and the Particle Cloud API allowed James to build a simple webapp that allowed him to turn the heating on and off from the comfort of his chair. James was particularly impressed by the ease at which the Spark Core handles HTTP, particularly when contrasting it with the pain of trying to get an Arduino to deal with HTTP.

With this basic system in place, he added a Raspberry Pi Zero and temperature sensor so that he could enable/disable the heating based on the ambient temperature of the room. He did this by using Dweet to send the temperature data to an app running on the web.

He finished up by showing us the next version of the app that allows him to set the temperature based on a schedule. 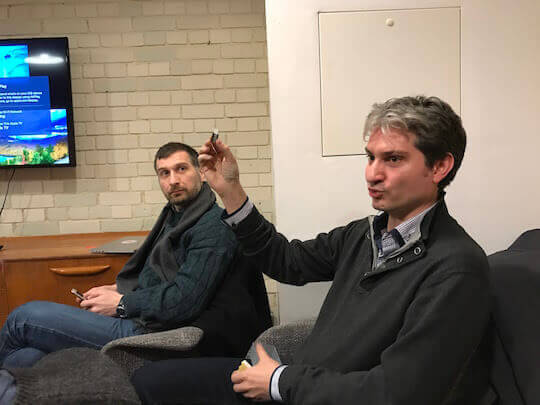 Alex talked about and showed us his Espruino Pico. It sounds a bit similar to an Arduino or Raspberry Pi but comes with the Espruino JavaScript interpreter and a web based development environment. Alex sounds particularly interested in the soon-to-be-available Puck.js. If I understood correctly, he’s imagining making use of the built-in Magnetometer to build a time tracking app that works by rotating the Puck.js to point at a particular project. 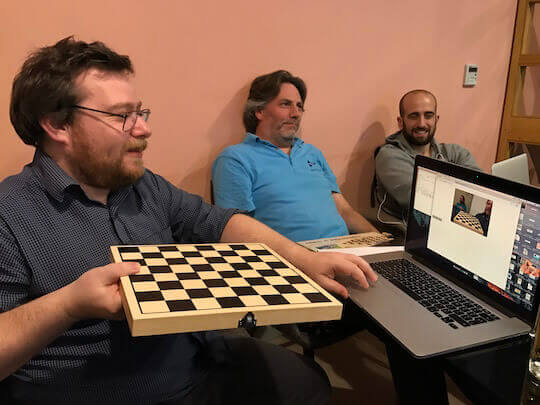 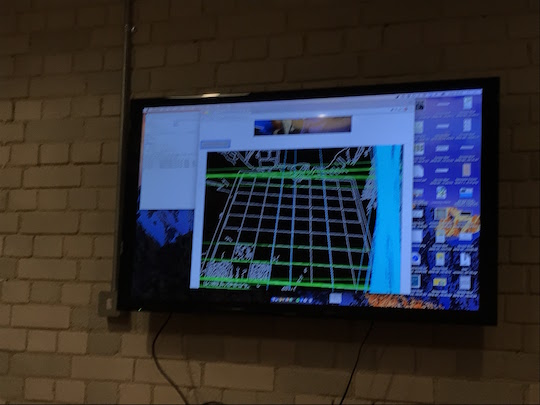 Ben demoed the chess project that he, James and I worked on in weeks 407 and 408.

He gave a brief overview of how we’d approach the problem before diving straight in and showing the game we’d built. Everyone seemed suitably impressed by the incredibly atmospheric dynamic sound track that accompanied the game :-) Check it out!

Ben then went into some detail about the image recognition work he’d been doing in our absence. The hope is that we can add dynamic audio tracks to real games of chess although it looks like there’s more work required before this will be possible. 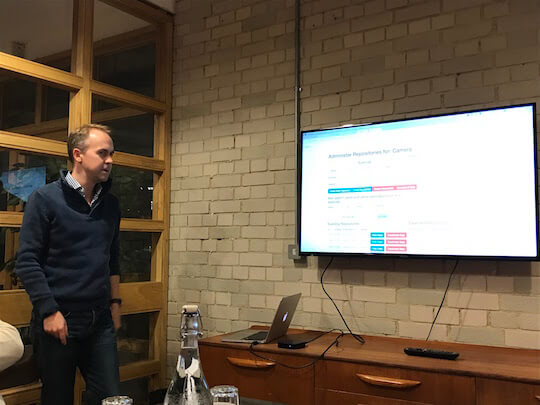 Rob went into more detail about his teaching process and systems that he demonstrated in Show & Tell 24.

I hadn’t quite appreciated how much of the system that Rob described previous is actually in place. It’s certainly more advanced that I’d envisaged from the demo last time.

Despite being fairly full featured there are still areas that Rob would like to improve (e.g. make it possible to use the system outside of the computing department) and he used this opportunity to ask for feedback on some of his ideas.

There were lots of suggestions from the group, particularly around the idea of utilising existing software (e.g. GitHub) or at least existing terminology (e.g. branches and Pull Requests). I really hope Rob found it useful and look forward to hearing about how it’s evolved at a future Show and Tell.