Afternoon y’all. I hope you’re all well and that those of you in England and Wales enjoyed the long bank holiday weekend.

The Credit Union project is still ticking along in the background, albeit pretty slowly.

We now have access to the ABCUL members’ area, which is great, although we haven’t yet had time to dig into the material that’s in there.

I’m continuing to use my Kalixa prepaid card to try to understand a little more about it. I’m really impressed with the way the transactions appear (via text, email and on my statement) almost immediately. It makes me wonder what we could do with such realtime information.

We’ve got into the habit of spending around an hour a week on the subject of growing the company. That doesn’t sound like a lot, and it can certainly feel like we’re making slow progress, but at least we’re now making some progress where I think we’ve struggled in the past.

We spent an hour listing some details about the projects we’ve worked on over the last four years or so. The hope is that listing the projects, and coming up with pros and cons of each, will help us come up with a bit of an idea about the sort of projects we enjoy. We hope that this will indirectly help us grow the company by a) helping us find some more client work, and b) giving us a stronger idea about what we’re doing when we talk to people that might be interested in joining.

One of the things James and I have been missing recently is getting our hands dirty with some development. To remedy that, we spent a couple of days working on a new Rails app - Video.

We learnt quite a bit while helping FutureLearn with their video player and wondered how easy it would be to glue some components together to create something similar to the existing services that are available. We’ve got as far as creating a simple app that uses AWS S3 and AWS Elastic Transcoder to convert uploaded videos to both MP4 and WebM that can be played through the VideoJS player. It’s been fun to get back to building some software and we’re hoping to spend some more time on it in week 293.

James spent a couple of hours on Thursday afternoon putting together the CubeX 3D printer we’re borrowing. Once assembled we printed one of the sample models that we downloaded as part of registering the printer.

We chose to print a bracelet as it was relatively small (approximately 70mm x 70mm x 30mm). It took an hour to print using the “Fast draft” setting, which sacrifices some quality for speed. We were a little alarmed when it started printing as we realised that we hadn’t calibrated it quite as carefully as we might’ve done. The problem didn’t last too long before it started printing OK, though.

We’re really pleased with the end result and are planning to spend some time calibrating it properly, and comparing the output using the different quality settings you can tweak in the software.

Thanks again for lending it to us, Makie! 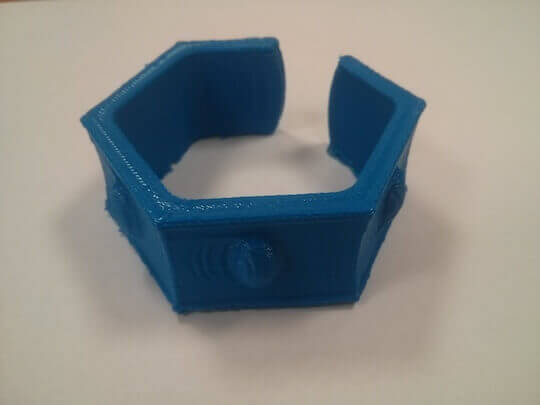 We were pleased to get rid of one of the larger cupboards, one of the multidrawer units and the suspension files last week. We celebrated their removal in style by adding yet more furniture in the shape of an Ikea coffee table.